The Past Has Never Been More Present

In 1972, divers discovered a shipwreck just off Key West, Florida. They were searching for the Spanish galleon Nuestra Señora de Atocha, but once they realized that this was an English ship, they stopped their excavation and didn’t return until 1983.
Eventually, it was revealed that this ship was the English merchant-slaver Henrietta Marie, which in the summer of 1700 took a shipment of 190 captive Africans and sold them in Jamaica before sinking under questionable conditions. Known as the “English Wreck” for the next ten years, it was not until July of 1983 that divers returned to the site along with archaeologist David Moore to study the wreck. They already knew that the Henrietta Marie would not yield monetary riches, but they hoped it could make an important contribution to our knowledge of the slave trade. Today, the Henrietta Marie is believed to be the world’s largest source of tangible objects from the early years of the slave trade.
Riches of another kind, most definitely…and a haunting tribute to the inhumanity that was so common in our world for so long. I’m looking forward to hearing David Moore’s story of this amazing and moving archaeological discovery.
Some items from the Henrietta Marie: 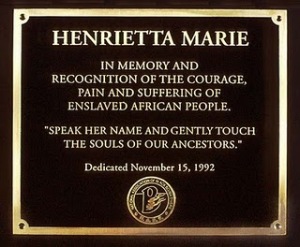